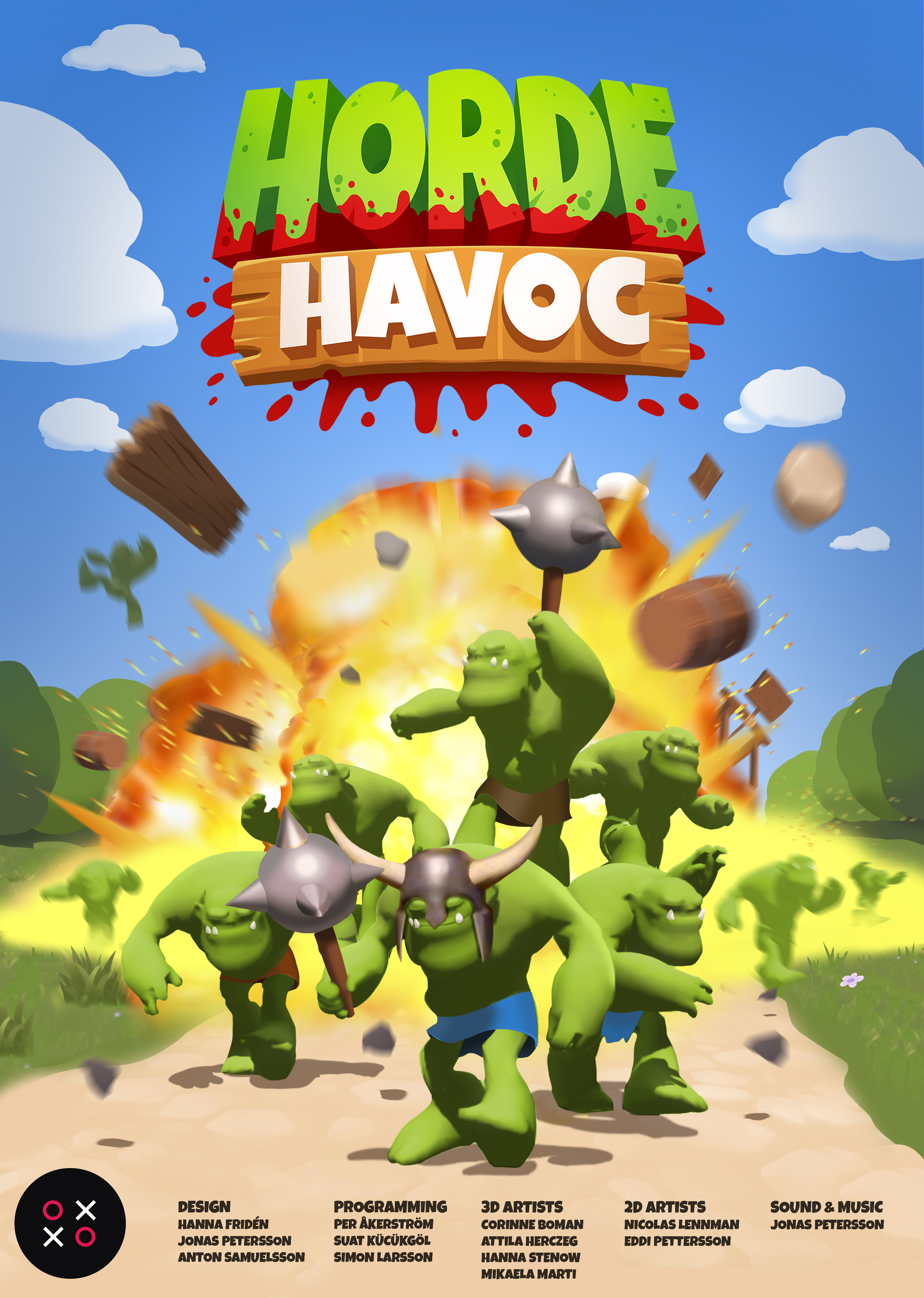 Horde Havoc is a casual puzzler with real-time strategy mechanics. Sacrifice your horde of obedient Orcs to solve problems your way!

We reasoned that orcs are very FLAMMABLE, as well as extremely EXPLOSIVE due to their wast issues with gas.

These, uhm, “properties” enable the player to use their orcs in order to sabotage traps and blow up obstacles.

But be careful! Orcs are afraid of fire and will start running around randomly if you don’t watch them properly. They might just set your whole horde aflame!

All of us designers in the team have iterated on all traps, so there is probably no sole blueprint in the game that has only been touched by one designer, but these are the ones which I created the original blueprint for.

(I also made a huge deadly meatball assembled out of orc body parts but no one on the team wanted this, it’s a mystery why…)


In each level, the goal is to reach the end with as many surviving orcs as possible. This created a problem with our design: How do we get players to explore the amount of chaos they can create?

Our solution:
Creative deaths equals higher scores! For each new way you find to kill an orc, your end points get multiplied. It encourages exploration and replayability.

We wanted to have as little text in the game as possible, but players still needed to understand what to do.

Every level has a fly through at the start which gives the player an idea about their goals, as well as a quick picture tutorial showing how the relevant mechanics work.

These were made using level scripting that made sure everything triggered in the right order.

One way to destroy several of the traps is to simply commandeer a bunch of loyal orcs and propel them all to their doom!

But this needed clear comunication, because players were a bit afraid of the blades. I first made it so the blades got slower each time they got weaker, but then I decided to add body parts and big amounts of extra blood. Then Jonas threw in an explosion, just for good measure!

Each oil barrel can only be used three times. This proved a bit tricky to communicate, so I spent a lot of time on the oil barrels and testing them on new players.

As the changes in the texture of the barrel and the lights weren’t enough, I made a simple oil mesh in Blender and used morph targets to animate it.

How do we teach our players without text instructions?

It’s a gamble to use tutorials without any text or voice instructions, but we felt that it really wouldn’t fit our game. If your game contains heaps of muderious bloodshed, but you still want it to be Ha-Ha-Funny, you better avoid as much human connection as you can.

Teaching the players the fire mechanic

Teaching the mechanic in itself was easy. You have orcs. You have fire. There’s wood blocking the way. There’s really just one choice here.

How do we make it FUN?

The real challenge of this tutorial was to make it fun. Horde Havoc is a crazy chaotic game, and in our original sketch of the tutorial, that didn’t come across at all.

I opted for a design that would always result in chaos: No matter what the player does, they WILL burn the forest down in seconds. They always panic, they always start clicking everywhere: But they do finish it, and with a good introduction to what the game is about:

Never expect that you know what’s going to happen.

The design was a collaborated effort in the whole team. None of us believe that the only good ideas come from design, and this was great when shaping our game!

I communicated my ideas with level sketches, puzzle sketches and flowcharts in order to figure out how different abilities could function in the game before we started development.

We scrapped most of our original ideas in favour of a set of simple core mechanics that could be used in many different ways.

During early prototyping, I made a level with the goal of realizing the kind of obstacles and trickery we wanted in the game.

It became obvious that the original pits we had planned would not be viable, so Instead, I created a saw blade trap, as well as a boulder and a boulder spawner, which proved to be an efficient replacement.

Testing how players works out the answers to puzzles

We used this level to test player behaviour. Wood, for an example, burns. Even though this makes sense, a lot of players tried to solve this puzzle by setting the fence on fire: Which resulted in them burning the whole bridge down and destroying the passage they assumed to be the safest.

As we learned what players would assume to be the most viable path going forward, we could start making puzzles that would surprise players, and end up in a chaotic mayhem, and thus create a humorous result and fun experience.

Horde Havoc was created during a time period of 4 weeks. Each of our disciplines had different end goals we needed to achieve, as well as separate milestones each week.

As the project manager, I was in charge of planning our work and uniting us as a team. I encouraged design choices that would support the other disciplines, as well as the other way around. I felt that this was the best strategy to use in order to prevent blockers and support team work during such a short project.

Coherent and consistent design is about more than just people following the vision of the lead: It’s about finding what we, as a team, can build together based on the set requirements of our project.

We reached all of our weekly milestones and our final end goals. Horde Havoc is a fun, chaotic game with emergent gameplay and modular abilities. It has visual progression, one which is constistent in the game doesn’t feel out of place even though the areas are different.

This is not just thanks to me, I could not have been part of a better team!